I decided to make some blueberry muffins, forgetting that I had thrown out my scuffed muffin pan. Can’t have muffins without a muffin pan.

I found this recipe for Sheet Pan Muffins online. An interesting concept that seemed worth a try. And they only take 20 minutes to bake and 10 minutes to cool, as opposed to an hour for a loaf recipe. (Now we’re talking.)

I followed the recipe as is, working with frozen wild blueberries—in hopes that they’ll be a little more flavorful than fresh ones. And I added cinnamon. I also cut the recipe in half, so we didn’t gorge ourselves. (Not that we would ever do that.)

The frozen blueberries caused a swirly blob in the batter, and the half-recipe did not cover the sheet pan. 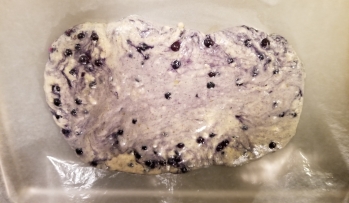 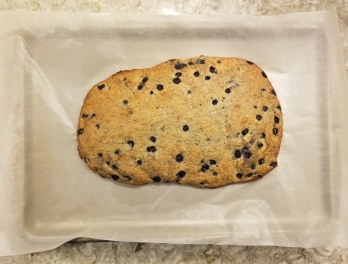 We didn’t have Turbinado sugar as called for by the recipe. We used confectioner’s sugar as a topping, instead.

The sheet pan muffin thingy isn’t bad, though it certainly isn’t sweet. It doesn’t have the comfort food, sweet and tangy flavor of a breakfast blueberry muffin. I’d consider it more of a snack that pairs nicely with a cup of tea in the afternoon.

It was an interesting thing to try, though I’m luke-warm on the idea of making them again. If I do, I’ll definitely top them with Turbinado sugar, sprinkling liberally.

>> Check out the Recipe for Sheet Pan Muffins by Food 52.