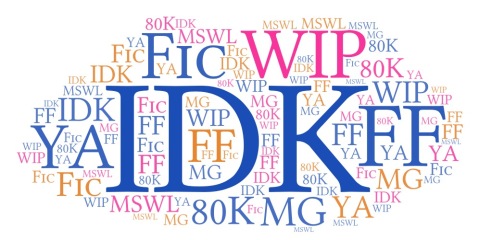 A long-time friend sent a group text announcing what “IDK” means. Her pre-teen had filled her in on the acronym. IDK stands for I don’t know, she wrote. She was passing on the knowledge to us forty-somethings to keep us “hip.”

The “hip” comment was the icing on the cake.

I must proudly say that I’ve known what IDK means for some time, and was slightly surprised that the others in the group didn’t know. To be fair, one other friend knew, too. But two out of five isn’t the best score.

The text message got me thinking. How did I know about IDK? Or IKR or IMHO, for that matter? The answer is Twitter.

Ever since I got active on Twitter about two years ago, I’ve been decoding and learning the popular acronyms. I’ve hit Google many times for translation. It always helps.

Check out: Keeping Up with Internet Slang and Social Media Acronyms on Day Translations

I quickly learned that the writing community on Twitter has its own set of acronyms and short-hand slang to learn, too. Things like:

There are more acronyms that come to mind, but you get the point. There’s Twitter-speak and there’s #writingcommunity Twitter-speak, and we writers need to know both….to stay hip, of course.

What other writer-related acronyms have you seen or used? Is there a cheat sheet out there, like this one for generic, popular acronyms? Crib notes? An app? Something? If not, there should be.

Side question: What’s the new word for “hip” anyway? *Sigh* That deserves its own blog post. Check out part two…

10 thoughts on “IDK, Am I Hip? #WriterAcronyms”