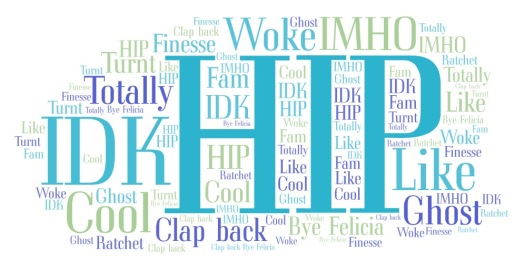 Last week, I wrote about #WriterAcronyms, and how important it is to understand them if you’re a writer using social media. I also joked about the word “hip”. The concept deserved its own post. So here we are…

Per Dictionary. com, one of the definitions for hip is:

“familiar with or informed about the latest ideas, styles, developments, etc.”

If I weren’t a writer, I probably wouldn’t think twice about the word “hip” and the concept it represents. But as someone in her 40s working on a fiction project with main characters in their late 20s, I wonder about these things.

Do I know enough about the latest trends to write from the perspective of a 27-year-old? Um, I think so.

But every 20 or so pages, I’ll write a bit of dialogue and think, “Would 27 year-olds say that? Would they use those words?” Then I answer my own question with a resounding, “Yes, they would use those words if they were 27 in the early 2000s.” And then I mope a little at this nugget of truth.

I mope because I’m falling victim to the generation gap. 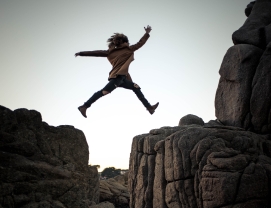 Here’s What I Don’t Want to Happen

The generation gap started sucking me in a few years ago. No matter how much kicking and screaming I did or how many skinny jeans I wore, I couldn’t escape it.

I recognized it happening when I stopped following what the latest singers or hottest new actors were doing.

Instead, I’ve been keeping up with politics and international news and new tax info, which is like an escape room that you can’t get out of. After trying to decipher all of that, there’s no more brain space to figure out who Travis Scott is, and whether I’ve heard one of his songs before.

As the generational divide deepens, I don’t want to become the female version of the middle-aged guy in the Progressive commercial, introducing himself as Tom Prichard in the middle of a nightclub dance floor and doing the air guitar.

If I start wearing pleated, relaxed-fit khakis, somebody slap me.

In my book, I don’t want to have my 29-year old protagonist printing out directions and tucking a flip phone into his belt holster, nor saying the speech equivalent.

Perhaps it’s good to have this level of self-awareness. It means all is not lost.

Being “Hip” in Your WIP

I don’t think a writer has to be cutting-edge with trends or slang. But one has to think about the age of their character and how that affects what he or she does and says.

I search things on Google. I read articles. I get on Twitter to see what’s trending. I ask younger family members questions.

At the very least, we writers should have enough awareness to recognize that a character of a younger age would NOT say or do something a certain way.

How trendy should we be with what our characters say?

The answer about using slang in books seems to be to shy away from it. It can date the book quickly, because trendy phrases go in and out of style. Grammar Girl says, “slang is informal and better used in dialogue, if at all.” This seems like a good camp to be in.

There’s another camp for the importance of colloquialism in literature. Penlighten says it strikes a chord and “forges a strong connection with the reader.” But that, I think, would be the case as long as the writer gets it right. If they don’t, according to The Guardian, it can fall flat. (Cue the air guitar.)

Are you feeling the pangs of a generation gap? Does it impact how you write and research characters who are younger than you?