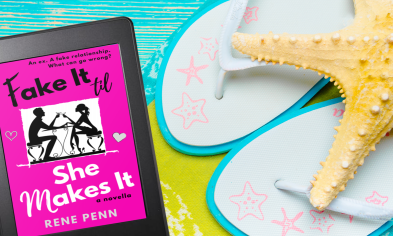 Soon I’ll be introducing my debut book, Fake It Til She Makes It, a novella about 140 pages long. I like to call it a #FFFRomance: Funny, Fast-Paced, Fun Romantic Comedy.

An ex-boyfriend. A fake relationship. A company weekend retreat. What can possibly go wrong?

Five years ago, Jacob Lancaster moved to New York to become an actor, leaving behind his ex-girlfriend, Nora. His dating life has suffered ever since.

Now he’s back in Washington, DC for good and wants to smooth things over with her. Maybe it’ll get him back on karma’s good side, and give his blah dating life a boost.

Thanks to a teeny mistake at an interview, bachelorette blogger Nora Leeds lands her dream job at a magazine.

The problem? The employer thinks she has a boyfriend, when she really doesn’t. And they’ve invited her and her so-called significant other to the company’s upcoming weekend retreat. But that’s a problem a fake relationship can fix, right?

The e-book will be on Amazon soon. Once it’s available, I’ll let you know here. Can’t wait!

7 thoughts on “Coming Soon, Fake It Til She Makes It”