No one can combine science, suspense, sass and romance like Diana Gabaldon does in her bestselling novels. When I saw her at the National Book Festival in Washington, DC, she repeated a rhyme that she recited as a professor, one she used to get the attention of the sleepy football players taking her science class. Let’s just say that the rhyme had to do with contraception practices from centuries ago: a man would “use a sock to wrap around his…” Well, I’ll let you fill in the rest yourself. And before you get on me about being PG-13, I’ll remind you that Diana said it, not me. *smile* 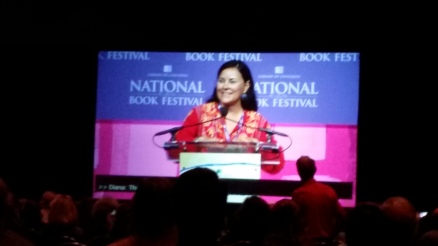 Here are some other things that I learned about Diana Gabaldon.

Do you have any other fun things to share about Diana Gabaldon?

Also while at the National Book Festival, I learned 10 things about David McCullough.